These piano demos were recorded after the first, staged reading of PERSUASION at The 5th Avenue Theatre in July 2015. As the show has developed, so have the songs. The Original Cast Album of the world-premiere Taproot Theatre production, featuring new and revised songs, will be digitally released in November 13, 2017. The CD release party will be at Taproot Theatre's Isaac Studio on December 4, 2017.

In "Prologue," Anne Elliot describes how eight years ago she allowed herself to be persuaded to break off her engagement to Captain Wentworth, a penniless naval officer with only himself to recommend him. "She had been forced into prudence in her youth, she learned romance as she grew older---the natural sequel of an unnatural beginning."

Anne's godmother Lady Russell calls a family meeting because "The Elliots of Kellynch" are buried in debt. Anne lobbies her father and elder sister to adopt the honorable course: cut needless expenses and within 6 years, the family will be solvent. Sir Walter and Elizabeth are aghast at the thought of not refurbishing the rooms every year. Instead, they leap at the alternative: leasing out Kellynch Hall and taking a "very long" vacation to the fashionable resort town of Bath, where importance can be purchased on the cheap. Anne is about to accede gloomily but learns that Kellynch Hall's new tenants will be Admiral Croft and his wife Mrs. Croft---Captain Wentworth's sister. What if Captain Wentworth told his sister to rent Kellynch to have an excuse to see Anne again? If Anne can delay her departure, perhaps she'll find a way "Back to the Ball" ....

Anne holds onto the hope of a reunion by staying at nearby "Uppercross," home to her sister Mary. Mary's husband Charles Musgrove enters with grand news: recently returned war hero, the rich and handsome Captain Wentworth, is coming to dinner! Charles's mother Mrs. Musgrove plans a feast while Charles's younger sisters Louisa and Henrietta are aflutter with the romantic possibilities. When Captain Wentworth arrives, he addresses Anne coldly and formally. At dinner, Captain Wentworth tells how with a broken heart he shipped off to sea and recklessly endangered his men, but instead of being destroyed he wound up heaping up "Glory and Gold."

Louisa and Henrietta can't tell which sister Captain Wentworth prefers ... but Louisa thinks it's only proper that Henrietta give up on him because she already has a man, albeit one more stolid and boring than the dashing captain. In "Uppercross Reprise / Anne Gives Advice," Anne advises Henrietta not to let anyone persuade her to defy her heart. But Mary is horrified when Henrietta decides to take up Nigel's offer of marriage. He's the son of a mere farmer! Captain Wentworth is incensed by Mary's haughtiness, which he ascribes to all the Elliots. He walks off alone with Louisa, and in "Nut Song," the two flirt while he praises her steadfastness, which he likens to the impervious shell of a hazelnut.

In the "Pump Room" of the resort town of Bath---a 19th century center for frivolity and fashion---Gossips are abuzz because the glamorous Elliots are greeted by the long-estranged heir to Kellynch Hall, the rich and eligible bachelor Mr. William Walter Elliot. Mr. Elliot and Anne share the secret knowledge that they have met before, on the seashore at Lyme, where he openly admired her. Now in Bath, Mr. Elliot means to take every opportunity to reconcile with Sir Walter and Elizabeth ... but most importantly, he means to charm Anne. It's a prospect that thrills Anne's godmother Lady Russell.

Anne is overcome with emotion when the Elliots receive news of Louisa's impending marriage to a sea captain. She rushes into the street, to be retrieved by the gallant Mr. Elliot. In "Wishes in the Well," he tells her that when we're young, we want passion or other childish notions; when we mature, we seek companions of refinement and devotion. A fall of rain interrupts his attempt to kiss Anne. They take shelter in a haberdashery. When Mr. Elliot leaves to fetch a carriage, Captain Wentworth bursts in, dirty and disheveled from his breakneck ride into Bath. He bears the news that Louisa is to marry ... Captain Benwick.

At an evening concert, Lady Russell is delighted by the attention Mr. Elliot showers on Anne, and pictures Anne returning home as the new Lady Elliot of Kellynch Hall. Then Captain Wentworth walks in. In "One Fell Swoop," Lady Russell upbraids Captain Wentworth for his shameful attempt to spoil Anne's happiness. Jealous, confused, and guilt-ridden, Captain Wentworth departs midway through the concert program.

At the ball, Mr. Elliot takes a knee and asks Anne to marry him. Before she can answer, Captain Wentworth bursts in. He confesses that he's been unjust, weak and resentful. Although Anne deserves someone perfect, and he's anything but, all he can offer is that she pierces his soul ... and he is "Half Agony, Half Hope." In "That's Home," Anne follows her heart and chooses to live in a place more profound than any happy ending. 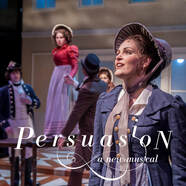